Enrica Soma (1929 – 1969) was an Italian-American socialite, model, and prima-ballerina. She was also the wife of director John Huston and mother of actress Anjelica Huston.

Soma was pushed into the entertainment industry by her father, using his connections he had gained through his restaurant. She studied ballet with George Balanchine and joined his company as a principal dancer. As a model, she appeared on the June 9, 1947 cover of Life Magazine at the age of 18. She worked often with Philippe Halsman.

She was offered a film contract by David O. Selznick, but turned down becoming an actress once she met Huston.

Philippe Halsman. Enrica Soma as a rococo courtesan via

Dame Alicia Markova DBE (1910 – 2004) was an English ballerina and a choreographer, director and teacher of classical ballet. Most noted for her career with Sergei Diaghilev’s Ballets Russes and touring internationally, she was widely considered to be one of the greatest classical ballet dancers of the twentieth century. She was the first British dancer to become the principal dancer of a ballet company.

With Dame Margot Fonteyn, she is one of only two English dancers to be recognised as a prima ballerina assoluta. Markova was a founder dancer of the Rambert Dance Company, The Royal Ballet and American Ballet Theatre, and was co-founder and director of the English National Ballet. 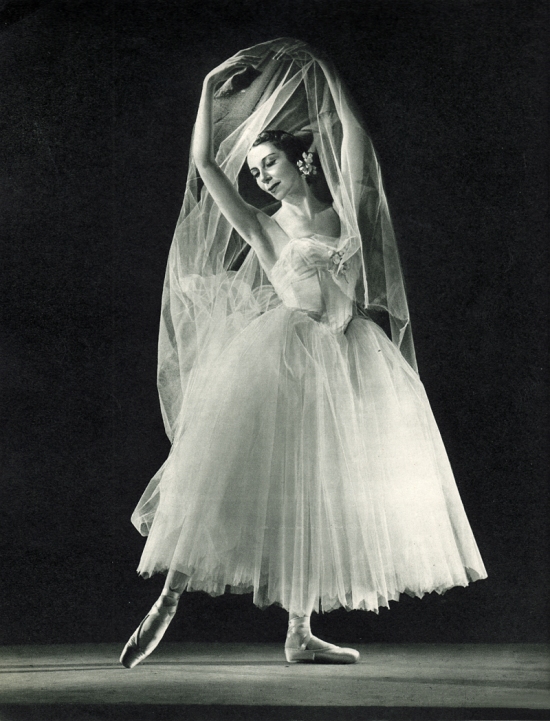 Alicia Markova in Giselle, as she appeared for the first time with the Grand Ballet du Marquis de Cuevas at the Empire Theatre, Paris, on November 21, 1953. Photo by Serge Lido via

The feisty Markova in Les Masques, 1933 via

Aleksandra Dionisyevna Danilova (1903 – 1997) was a Russian-born prima ballerina, who became an American citizen. In 1989, she was recognized for lifetime achievements in ballet as a Kennedy Center Honoree.

Born in Peterhof, Russia on November 20, 1903, she trained at the Russian Imperial Ballet School in Leningrad (formerly and currently St. Petersburg). She was one of the few Russian-trained ballerinas to tour outside Russia. Her first professional post was as a member of St. Petersburg’s Imperial Ballet.

In 1924, she and George Balanchine left Russia. They were soon picked up by Sergei Diaghilev’s Ballets Russes; Danilova as a dancer, Balanchine as a choreographer. Danilova toured for years with the Ballets Russes under Sergei Diaghilev, then with the Ballet Russe de Monte Carlo after Diaghilev’s death.[1] With the latter company, Danilova andFrederic Franklin created one of the legendary ballet partnerships of the twentieth century. Danilova became known for her glamour and beautiful legs, as well as her work ethic and professionalism.

Danilova made her Broadway debut in 1944’s Song of Norway; her last ballet performance was in 1957. 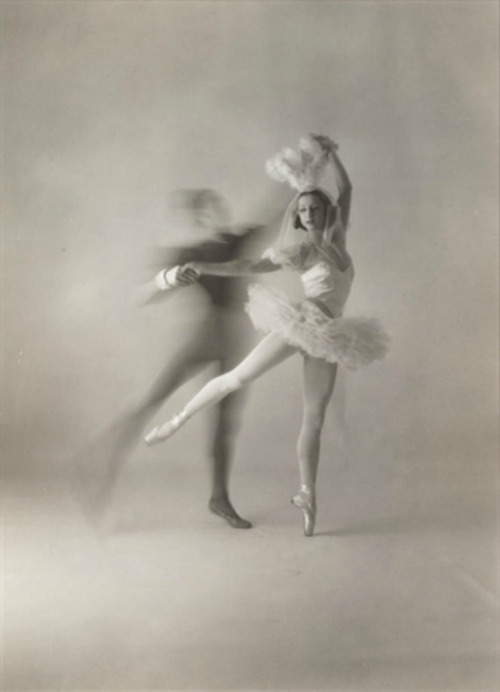 F. Franklin and Alexandra Danilova by Irving Penn, 1948 via 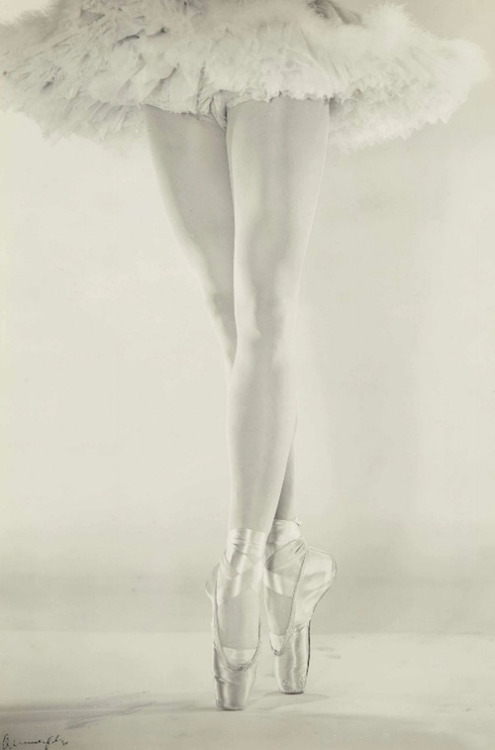 The Legs of Danilova, New York by Erwin Blumenfeld, 1950 via

Nina Leen (d. 1995) was a Russian-born American photographer and a constant contributor to Life. A self-taught photographer she never became a staff photographer, but she contributed as a contract photographer until the magazine closed in 1972.

In 1949 she shot the sassy subculture of circus girls in Sarasota, Florida, dubbed “the home of the American circus” for the magazine. 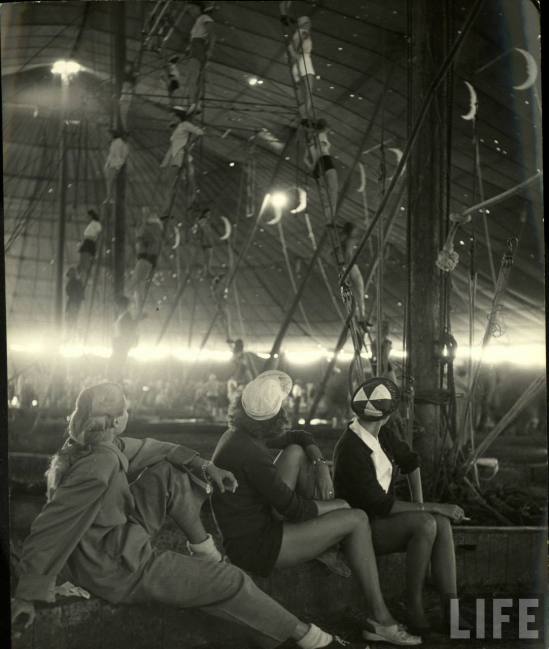 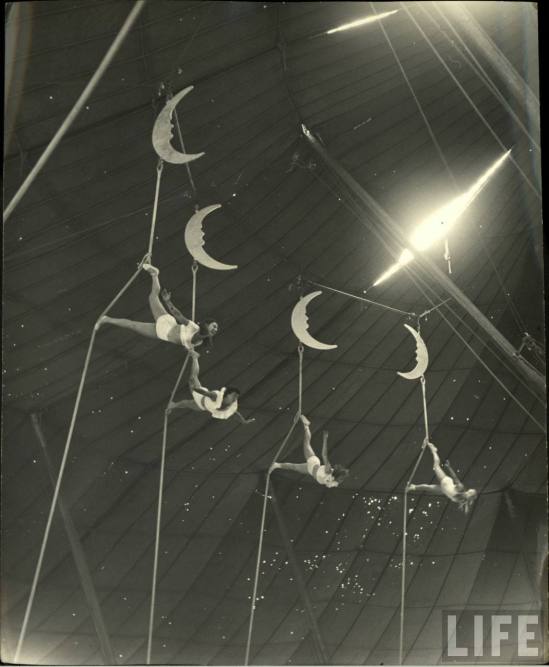 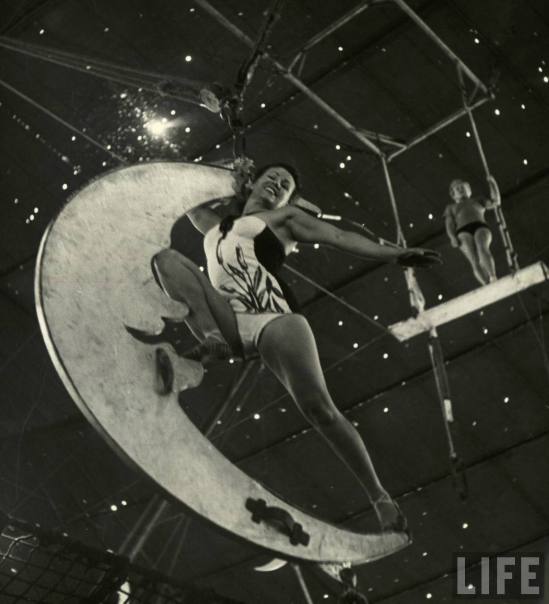 Sir Laurence Olivier and Vivien Leigh smile at the waiting crowd as they step from the plane at Archerfield Aerodrome. They were enroute to Surfers Paradise. The Oliviers had flown from Hobart where they were touring with the Old Vic Company. (Information taken from the Courier Mail, 21 June 1948, p.1) via

During their arrival at Archerfield airport a young woman gave Sir Laurence two pineapples and said, ‘Here is your first gift from Queensland’ (Information from Courier Mail, Monday 21 June 1948, p.1) via

Sir Laurence Olivier and Vivien Leigh on the short holiday at the Gold Coast. Sir Laurence is elegantly dressed in a jacket, flannels and a open-necked shirt with a cravat. Lady Olivier is wearing sunray pleated skirt and a short-sleeved blouse. They are posing with a camera via